The Wright Kind of Sunday

"Hey there, hot stuff! So let me tell you a little story about my Sunday with my family." 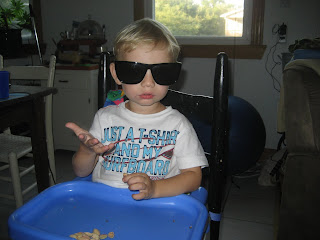 "We rode our bikes to the Wright Brothers Monument. Well, technically, I did most of the riding while Mom and Dad did the pedaling. But I digress. We got to the airport just in time to see a plane take off, then we parked our bikes and headed up the monument." 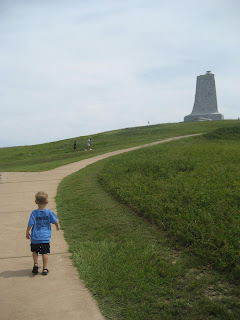 "Whew! What a journey! I stopped for a moment to check out a bug on the sidewalk, 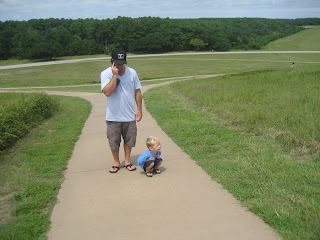 then finally made it to the top. I found a nice seat and enjoyed the scenery for a bit." 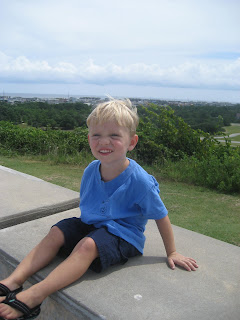 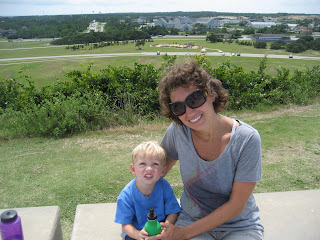 "We posed for a family portrait." 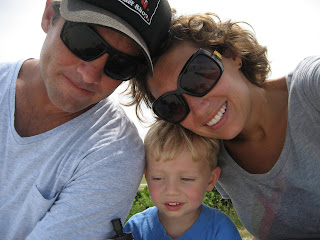 "Dad and I did some exploring." 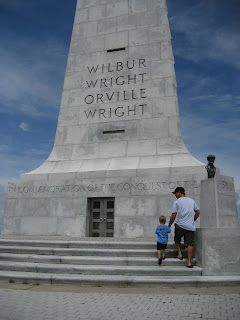 "Check out the really neat sky." 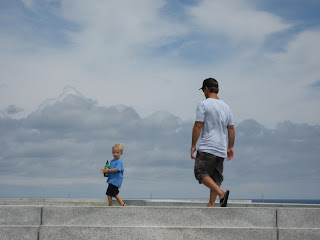 "Mom talked me into going and knocking on the big door. No one answered. Then she tried to convince me that she knew there wasn't anyone there. Sometimes I wonder about her humor. . ." 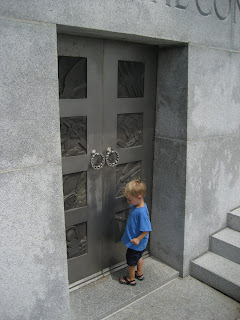 "After the monument we went for a slice of pizza, played at the park, then pedaled (or rode, in my case) home for naps. We had a great day, just the 3 of us."

Email ThisBlogThis!Share to TwitterShare to FacebookShare to Pinterest
Labels: family

A Run Down Memory Lane

Tuesday I spent the early morning hours running through Manteo. I had to go to the courthouse by 9:15 in order to get my expired registration ticket dismissed (what a pain!) and I also had to do 5 miles. Solo. Tuesdays are the days when I run by myself and 5 is going to be the most I have to do on a Tuesday. It was the first time doing 5 solo so I thought I would try to make it a little more interesting.

So here's what I did. I called my Aunt Freda, who conveniently lives in Manteo, and asked her if I could take a post-run shower at her house before having to be in court. (I like say, "having to be in court" as if it was for something scandalous, or as if I was a lawyer or something! No, I just serve barbeque for a living, thankyouverymuch.) Of course she obliged, and the plan was made. I left home around 6 and got to her house just as the sun was coming up, orange and huge. I ran along the docks on the Manteo waterfront and had the most beautiful view. The sun was coming up, fish were jumping, geese and ducks were floating, and the docked boats were still in the water. Awesome. I ran through Festival Park and along the boardwalk there. I saw a rabbit and a few ballsy squirrels.

Then I channelled my inner Manteo High School Cross Country runner and ran along some of the training routes we used to do daily. I ran behind the Manteo Cemetary (where people are just dying to get in (hahahahahahahahah)) and up the road leading to Manteo High. I smiled as I passed "Cancer Corner" where all of the teenage smokers used to hang out and smoke, one step off of school grounds, and entered the Manteo High campus. I was overcome with memories of high school!

I ran one lap around the track, remembering exactly where my dad was standing, by the away team bleachers, when during an 800m race he told me to "turn it on and pass her!" when I was not far behind a Senior teammate who I never knew I could beat until he told me I could. And I did. I had to hold myself back as I got to the middle of the last turn in the track before heading into the final 100m where I should have been giving it all I had on the way to the finish line. I held back this Tuesday because I still had 3 miles to go! I remembered the part of the fence where my mom always stood, near the finish line, with all of the other parents, at every single track and cross country meet. Bless her giant heart!

And then it was on to Mother Vineyard. Try as we might, in high school we could never find a cut-through to shorten that loop, which my Garmin told me was a good 2 miles. I didn't need or want to cheat this time, and loved the easy, pretty neighborhood loop, writing my blog post in my head as I travelled. After the Mother Vineyard loop I headed back to Aunt Freda's house, a mere 5.1 miles later. It was a great run! I will be running in Manteo again soon, for sure.

And I even got to watch a few minutes of the Today Show and read a little of my book while sipping a cafe au lait in a cute little coffee shop before my big court appearance. I had a great morning. All by myself.

Sometimes that is much needed. A little time to run solo.

Email ThisBlogThis!Share to TwitterShare to FacebookShare to Pinterest
Labels: running

Half-marathon training officially starts tomorrow. It is pretty sad how excited I am about this! There have been times in the not-so-distant past that I would have thought running 1 mile would kill me, and I'm about to go on a journey that will take me 14 miles on one run in a matter of weeks. Crazy! But so exciting!

Tomorrow I will strap on my new Garmin Forerunner 305 (thanks, Mom!) and go for my first "official" training run. At 5:15 a.m.. Wow. Wonders never cease.

And on a totally different note, I made the really bad decision to not fight Kingston about taking a nap this afternoon and instead let him lay in my bed and watch a movie in hopes that he would doze off. What actually happened was I laid down with him and fell asleep for about 15 minutes but he never once shut his eyes. And I paid for it later, that's for sure! My boy still needs his afternoon nap. So much so that I put him in bed at the record early time of 7:15 and he was quiet (and asleep, I assume) by 7:30. Lesson learned. Crisis averted.

So tomorrow, I hope 2 things: 1. I hope my first training run is wonderful with my new watch! 2. I hope Kingston doesn't wake up at 6:00 since he went to bed so early!!! 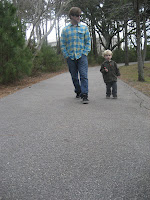